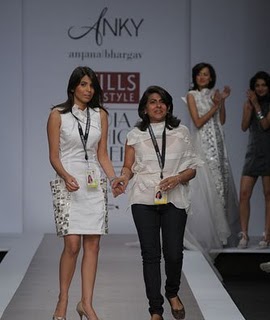 New Delhi, Aug 26 : Mother-daughter designer duo Anjana and Ankita Bhargav has reworked on classical designs of men's wear by giving it a contemporary look and will unveil it at the upcoming Van Heusen India Men's Week (VHIMW).

The designer duo of label ANKY will be showcasing for the first time at the VHIMW, opening Friday.

Looking at a void in the semi-formal club lounge, the duo has churned out a collection that one can wear for a Friday night out or for relaxed outings with friends and also at a friend's wedding.

"We have focused more on shirts. Though our line does have some drop crotch pants, we have reworked on classical designs through out-of-context use of fabrics and given it a new dimension," Anjana told IANS.

The two have only various shades of white for this line with innovative built-up collar and out of proportion layering. Fabrics used in the line are soft cottons, hand crushed silks and pashmina-tussar mix.

"The traditional kurta has also been given a new dimension. Our line has kurta inspired shirts, a lot of 3-D pockets have been used and we have experimented a lot with collars," Anjana said.