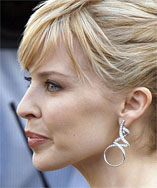 London, Oct 21 : Pop superstar Kylie Minogue is to be immortalised with a statue in London's famous gay district.

Minogueâ€™s most loyal gay fans campaigned for gaining permission to have a statue of the Aussie erected above the Old Compton Street.

A bronze model of the 39-year-old singer, which will be placed on an arch over-looking the street, will see her in gold hot pants.

â€śThe Eros statue should be in Old Compton Street, not Piccadilly Circus. But weâ€™re having our very own little goddess of love, in the form of Kylie,â€ť The Daily Star quoted an insider, as saying.

â€śThere are plans for a similar Kylie statue on Canal Street in Manchester. But London will be Britainâ€™s first city to be blessed with her bronzed buttocks.

â€śWe donâ€™t want her bottom to be worn to a nubbin from daily rubbings from the superstitious and deviant, so we want her most famous area to be out of reach,â€ť the insider added.

The insider further said that five other statues of worthy gay icons would be joining the Australian singer.

â€śKylie is our favourite gay icon, so her statue will be erected first. The other names are being held under wraps at the moment,â€ť the insider said. (ANI)