Kylie Minogue annoyed with Mylo for posting songs on MySpace 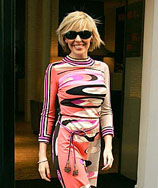 London, Oct 21 : Pop superstar Kylie Minogue is annoyed with dance demon Mylo for posting the songs he wrote for her on MySpace.

None of the tunes made the final tracklisting, but Mylo posted the songs so that fans could listen and download them for free.

Apparently, Minogue is really furious with his move.

ŌĆ£Kylie is really easy-going as a rule but this got her back up,ŌĆØ The Daily Star quoted an insider in the MyloŌĆÖs camp, as saying.

ŌĆ£The songs didnŌĆÖt make the album so that should have been the end of it.

ŌĆ£She really feels she should have had some say in whether the tracks were made public, especially as her vocals are on them.

ŌĆ£What started out as a friendly working relationship between her and Mylo has deteriorated. He has now been well and truly frozen out of the Kylie fold,ŌĆØ the insider added. (ANI)