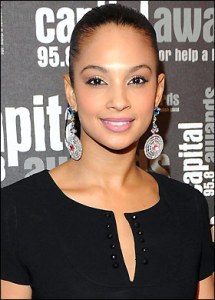 London, Oct. 8 - British singer-songwriter Alesha Dixon recently took to Twitter to announce that she was "elated and over the moon" after welcoming her new daughter, Azura Sienna, who was born last week.

The Britain's Got Talent had declared in June that she was expecting her first child with partner Azuka Ononye, the Daily Star reported.

The eccentric Dutchman auditioned shirtless - he came dressed in a red leather jacket and sequinned leather trousers. He impressed the judges when he sang classic tune "Backdoor Lover".

"Maybe Alesha and I can write music together. I'll wait for that day, after I win the show and then I'll contact Alesha. I'll say 'come, let's make music together'," thesun. co. uk quoted Broekman as saying.

Dixon not worried about ageing

London, April 5 : TV personality Alesha Dixon doesn't worry about getting older and insists her thirties have been the best period of her life so far.

The 34-year-old feels better than ever.

"Since I turned 30, I've never felt better in my own skin. I don't worry about the future because that will take care of itself," femalefirst. co. uk quoted Dixon as saying.

I could have been an Olympian, says Alesha Dixon

London, July 24 : Alesha Dixon, who has a successful music career and a stint on two of the UK''s biggest talent shows under her belt, has revealed that she once had dreams of becoming a professional athlete.

The 33-year-old singer used to run for England and had hopes of eventually flying the flag for her country.

"Before I got into music, I studied sport and used to run for my county," the Daily Mail quoted Dixon as telling LOOK magazine.