Washington, Nov 17: Hollywood superstar George Clooney has warned Matt Damon that if he couldn't live up to the responsibilities of the â€˜Sexiest Man Aliveâ€™ title, heâ€™ll take over the position from

The â€˜Bourneâ€™ series actor was chosen for the top spot from having not only having an irresistible sense of humour, and heart-melting humility but also being rock solid family man.

And, he was certainly appreciative for the honour.

Matt Damon isn't finished with Jason Bourne as yet 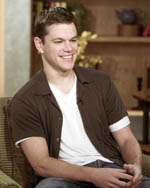 Washington, Oct 19 : Actor Matt Damon has revealed that if he gets a chance to star in another 'Bourne' sequel, he would surely do it.

Damon has played the role of amnesiac assassin Jason Bourne in the successful action movies 'The Bourne Identity,' 'The Bourne Supremacy' and 'The Bourne Ultimatum.'

The 37-year-old actor has revealed that he owes a lot to his character in the film and that's why wouldn't turn down another film in the series.

Washington, Oct 5 : Matt Damon decided to cut back the number of movies he was planning on making after wife Luciana Barroso threatened to walk out on him.

The couple married in 2005 and have a 16-month-old daughter Isabella. They are also parents to Barrosoâ€™s daughter Alexia.

However, Damonâ€™s hectic work schedule meant that he was hardly spending any time at home, and he admits that his wife had finally had enough.