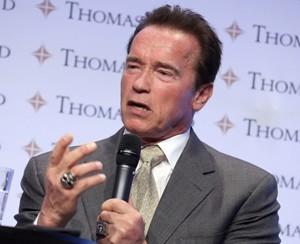 London, Dec. 9 : When Arnold Schwarzenegger suggested people that they should eat less meat, he was criticised all over the social media.

The 68-year-old actor previously suggested that the best way to cut down is to have a couple of meat free days a week, reports the BBC.

Soon after his comment, micro-blogging site Twitter got filled up with people calling the 'Terminator Genisys' star a hypocrite, because as a bodybuilder he's eaten a lot of beef over the years.

This tweet sums up a lot of the cynicism online.

Schwarzenegger also said that right now seven million people are dying every year, which is alarming and everyone in government has the responsibility to protect the people. He thinks that eating less meat would be a good way to start. (ANI)