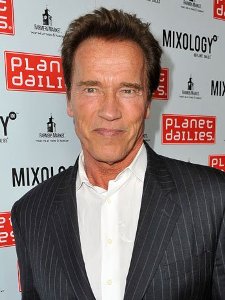 New York, Sept 9 - Arnold Schwarzenegger recently unveiled his official portrait which is a giant image of the "onetime bodybuilder" standing in front of the official California seal.

The oversized portrait of the former California Governor was painted by Austrian artist Gottfried Helnwein, a realist who had earlier painted Andy Warhol and John F. Kennedy as well, the New York Post reported.

The 'Terminator' star said that he always dreamt about California, and he knew that one day he would have to come here to this beautiful state if he wanted to make his dreams a reality. (ANI)