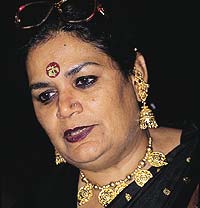 Uthup, 63, a pop singer, is well-known for her heavy voice and linguistic versatility as she can sing in 16 Indian languages and several foreign languages as well.

Her songs "Ek do cha cha cha", "Shaan se", "Hari om hari", "Rambha ho", "Dum maaro dum" have regaled listeners since 1978. She will be making a film appearance in Vishal Bharadwaj's upcoming movie "7 Khoon Maaf", in which she has also sung the song "Darling".

Girish Kasaravalli, 60, is regarded as one of the pioneers of parallel Kannada cinema and has won four National awards. His movies "Ghatashraddha", "Tabarana Kathe", "Thaayi Saheba", "Dweepa" and "Gulabi Talkies" have been widely appreciated.

Malayalam director Shaji N. Karun ventured into cinema in 1988 with "Piravi", which went on to won an award at the prestigious Cannes Film Festival the next year. The 59-year-old has earned a lot of international acclaim over his two-decade-old career, and has won several National Awards as a director and cinematographer.

Actor Jayaram Subramanian is one of the best known actors in Kerala, and is usually cast as a hero in family dramas.

Other Padmi Shri awardees from the field of cinema include actors Tabu, Kajol and Irrfan Khan.(IANS)