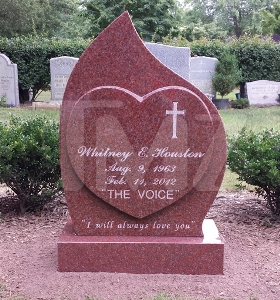 Los Angeles, July 16 - Late singer Whitney Houston's tombstone has her lyrics "I will always love you" engraved on it.

The singer, who passed away in February 2012, was rested in Fairview Cemetery in Westfield, New Jersey, next to her father's grave. The headstone to her grave was added last week, reports tmz. com.

The song was originally sung by singer Dolly Parton in 1974, and it was later covered and sung by Houston in 1992 for the movie "The Bodygaurd". It became an instant hit.

Houston died after drowning in her bathtub following a cocktail of marijuana, cocaine and prescription drugs while she was getting ready for the 2012 Grammy Awards in Los Angeles. (IANS)