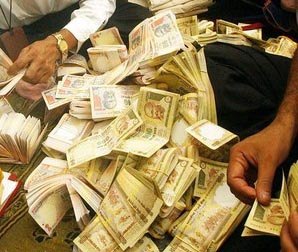 Lucknow, Aug 10: The Uttar Pradesh Government has handed over to the Central Bureau of Investigation (CBI) a probe related to a fake currency racket emanating from the State Bank of India's (SBI) Dumariyaganj branch in Siddharthnagar near Lucknow.

The racket was busted after one Abid, a resident of Sidharthnagar was arrested and Rs. 5 lakh in Fake Indian Currency Notes (FICN) was recovered from him.

Abid named Sudhakar Tripathi, a cashier at SBI's Dumariaganj branch, as his co-accused. The Special Task Force (STF) of the Uttar Pradesh police arrested him after a total of Rs 7.2 lakh was seized from his residence out of which Rs 50,000 were in FICN.

The STF has asked the RBI to screen the currency notes available in the chest of the banks in the districts bordering Nepal.

According to the Uttar Pradesh STF, out of the two arrested, Abid was in regular touch with his links in Nepal, Hong Kong apart from some other countries.

To trace the route of the money earned by them, the Enforcement Directorate (ED) and Central Bureau of Investigation (CBI) sleuths are emphasizing on the assets of the arrested accused.

The known assets of the two accused are estimated to be somewhere in the region of Rs. 10 lakh.

So far, cops have seized fake currency from Shameem, Mehandi and Saleem in Aligarh.

In a similar catch, another Rs 25 lakh in fake currency notes was found on Sohail of Gonda. He was working with Sanjay Paswan, Vinod Kumar and Sanjay Patel of Bihar. In Aligarh, Momin, Anisuddin and Pramod was arrested.

The question in the authorities mind, according to a report in a prominent daily is whether Uttar Pradesh is turning into a major fake currency hub in the country.

This year, over two-dozen such cases have been reported so far in UP. According to the statistics of the UP Police, the state topped the country in the number of cases registered in 2007 in connection with fake Indian currency.