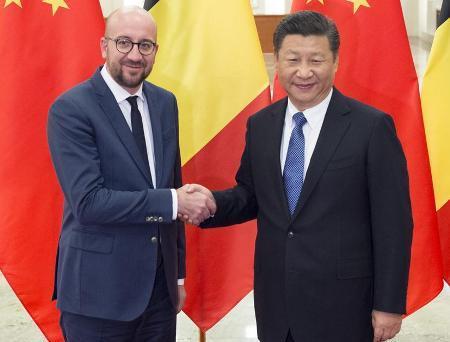 Beijing [China] Nov. 1: China and Belgium have agreed to expand cooperation in areas such as investment, new energy and in the Belt and Road Initiative.

Urging Belgium to take opportunities provided by the Belt and Road Initiative to boost development of the China-Europe and Asia-Europe logistics industry and cross-border e-commerce, Xi said that the two countries should explore cooperation in high-end technology and industries with high added value.

The Belt and Road Initiative was proposed by the Chinese President in 2013 which refers to the Silk Road Economic Belt and the 21st Century Maritime Silk Road that aims to build a trade and infrastructure network connecting Asia with Europe and Africa along ancient trade routes.

Xi said that his country appreciates and welcomes the willingness of Belgium to join the Asian Infrastructure Investment Bank and wishes it becomes an AIIB member country as soon as possible.

He also hoped that Belgium would urge the European Union to fulfill its obligations under Article 15 of the Protocol on China's accession to the World Trade Organization (WTO) in due time.

The Belgium Prime Minister is on an official visit to China as the two countries celebrate the 45th anniversary of their diplomatic ties.

Recalling Xi's state visit to Belgium in 2014, Michel vowed to strengthen the cooperation with China in diversified areas, including investment, innovation, aviation, new energy and infrastructure and added that his country is committed towards boosting EU-China ties featuring mutual trust and mutual benefit.

A series of cooperation agreements were signed between the two countries on extradition and criminal transfer, and a letter of intent on opening flights between Shanghai and Brussels

Urging Brussels to relax restrictions on high-tech exports to China Chinese Premier Li Keqiang during his talks with Michel called for a stronger bilateral cooperation in technological innovation, advanced manufacturing and security.

Stating that Belgium will stick to free trade, Michel said they are committed to expand cooperation with China in areas including agriculture, information and communication, finance and insurance.

Pledging to facilitate negotiations on the EU-China investment agreement, he said that Brussels is ready to deal with issues related to the EU's WTO obligations in a positive and pragmatic manner. (ANI)