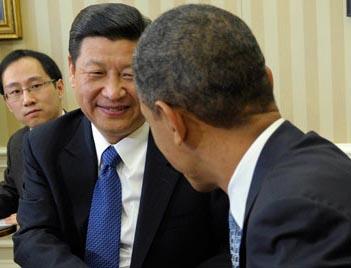 New Delhi, Dec. 1 - US President Barack Obama met his Chinese counterpart Xi Jinping on the sidelines of the Climate Change Conference (COP21) in Paris and reaffirmed their determination to work together and with others to achieve an ambitious climate agreement at the Paris climate negotiations.

According to a statement by the White House, both the leaders set priorities for U.S.-China relations in 2016 and committed to continue 'narrowing differences and expanding practical cooperation on regional and global challenges'.

"The President emphasized the importance of full adherence to the U.S.-China cyber commitments from President Xi's September 2015 State Visit, and he also stressed the need to address regional issues, including maritime differences, peacefully and in accordance with international law," the statement said.

It added that both the leaders also recognized the threat posed by the Islamic State of Iraq and the Levant (ISIS) to America and China and agreed to strengthen coordination.

"The President encouraged President Xi's efforts to press forward with reforming and rebalancing China's economy, while urging China to establish a level playing field for U.S. firms to compete fairly in the Chinese market," the White House statement read.

Obama also expressed his support for China's G-20 presidency in 2016 and said that he is looking forward to attending the G-20 summit in Hangzhou, China next September. (ANI)