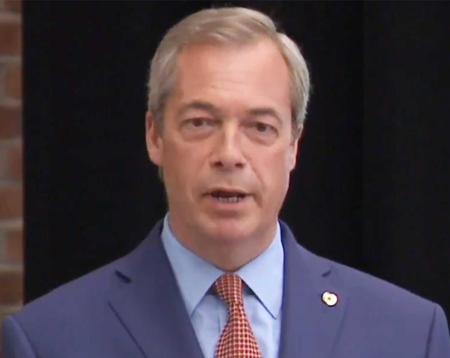 This courtesy call was described by one of aides of the President-elect as a "very productive" meeting.

Farage was spotted in the lobby of Trump Tower on Fifth Avenue and yelled out, "We're just tourists!" when reporters asked what he was doing there, reports the CNN.

"I think they enjoy each other's company, and they actually had a chance to talk about freedom and winning and what this all means for the world," Conway said.

Farage later tweeted, "It was a great honour to spend time with @realDonaldTrump today. He was relaxed, and full of good ideas. I'm confident he will be a good President."

In a series of tweets he said, "His (Trump's) support for the US-UK relationship is very strong. This is a man with whom we can do business."

"Especially pleased at @realDonaldTrump's very positive reaction to idea that Sir Winston Churchill's bust should be put back in Oval Office."

Farage, a longtime Trump supporter, endorsed the latter at a rally in Mississippi in August and Trump made frequent references to Brexit throughout the campaign, saying it demonstrated the wish for change among voters frustrated with establishment politics. (ANI)