India will be delighted to welcome Malaysian PM: PM Modi 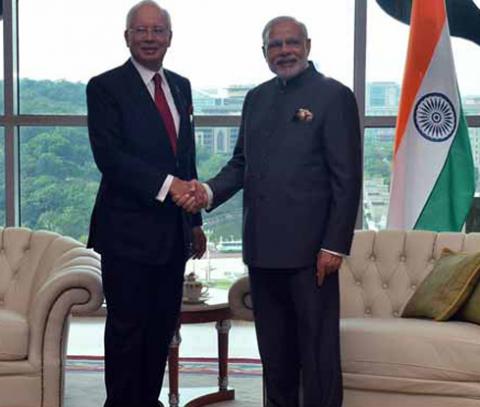 New Delhi [India], Mar. 29 : Indian Prime Minister Narendra Modi has said that India will be delighted to welcome Malaysian Prime Minister Najib Razak to the country, adding that his counterpart's visit will boost relations between the two countries.

Prime Minister Razak is scheduled to arrive on a five day visit to India later this week.

This came after Malaysian Prime Minister informed that he will be travelling to India on a five day visit and is looking forward to meet Prime Minister Modi.

"I'll be travelling to India for a 5-day visit. A country that's been our friend since 1957. Looking forward to meeting PM @narendramodi again," Prime Minister Razak tweeted.

"The visit of the Prime Minister of Malaysia to India promises to be an important one. We are confident that we will take to a new high our close bilateral ties in defence and security, investment and commercial ties, health and Indian traditional medicine, education and entrepreneurship, sports, etc.," The New Straits Times quoted India's High Commissioner to Malaysia T.S. Tirumurti as saying in an interview.

Prime Minister Razak had visited India in January 2010 and again in December 2012 to attend the ASEAN India Commemorative Summit.

Prime Minister Modi and Razak had met on the sidelines of the India-ASEAN Summit in Nay Pyi Taw in November 2014 and agreed to take forward the strategic relationship between the two countries.

Prime Minister Modi undertook an official visit to Malaysia on November 2015 at the invitation of Razak.

The two Prime Ministers held official talks in Putrajaya and jointly inaugurated the Torana Gate in Brickfields, Kuala Lumpur, a gift from India to Malaysia. (ANI)