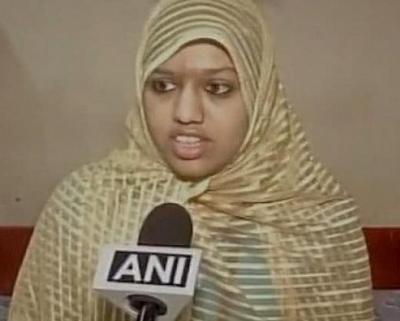 Mandya (Karnataka), Mar. 23 : Thanking Prime Minister Narendra Modi for providing her education loan so that she could complete her studies, the Muslim girl from Karnataka today said the former is connected with the masses and added that he has not launched the schemes just for namesake but implemented them in true sense.

The girl BB Sara, who is an MBA student, said that Prime Minister Modi has always worked as a helping hand when any one is in need.

"Despite being a national leader, he is attached with the population. Whatever schemes he has initiated, he has implemented them. He has not launched them just for name sake purpose," Sara told ANI.

"It's quite unbelievable that out of 125 crores population, he took notice of Sara's letter and helped her," he told ANI.

The girl had earlier written a letter to Prime Minister Modi seeking education loan so that she could complete her studies. She got a response from the Prime Minister's Office (PMO) within 10 days of her request.

The 21-year-old had approached Central Bank of India for an education loan to continue her studies. However, her repeated request to the bank authorities had fallen on deaf ears.

The girl then decided to write a letter to Prime Minister Modi in which she gave reference of the 'Beti Bachao Beti Padhao' initiative and requested for help. (ANI)