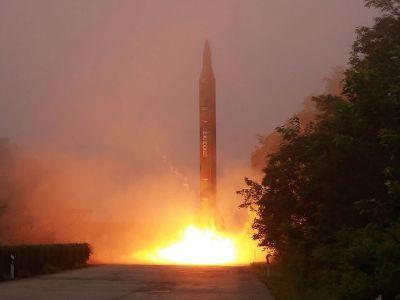 CNN quoted the South Korean official as saying that the projectile was fired from North Korea's Sinpo region in South Hamgyong Province.

Earlier, North Korea had warned the global community that it will retaliate if they put sanctions over its latest round of weapons tests.

A senior White House official on Tuesday said that the United States is considering all options on the table as the time for resolving the North Korean nuclear issue has now run out.

"The clock has now run out, and all options are on the table," the official said in respect to the failure of successive efforts to negotiate an end to North Korea's nuclear program.

The official added that U.S. President Donald Trump plans to urge China to exert leverage over North Korea as Pyongyang is a matter of urgent interest for him.

Hyten said he would be providing military options to the president in dealing with the threat from North Korea, but maintained that China's involvement was critical in solving Pyongyang's nuclear challenge.

He told the committee that China is the definition of North Korea's backyard as economic links between the two countries has made Beijing an important player in curbing North Korea's nuclear ambitions.

Trump administration has always highlighted its concern over the North Korean nuclear threat.

Moreover, Trump has always argued that China is responsible for the continued nuclear proliferation in North Korea.(ANI)