No farmer committed suicide over drought: TN Govt. to SC 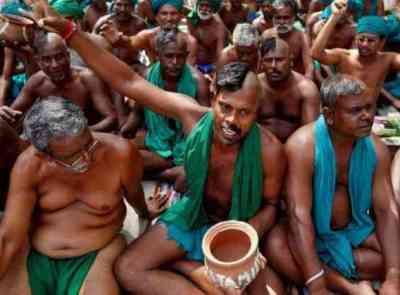 New Delhi [India], Apr. 28 : In a development bound to anger the protesting Tamil farmers in the national capital, the Tamil Nadu Government on Friday conveyed to the Supreme Court that drought is not the reason for farmer suicides in the state.

The Tamil Nadu government filed a reply in the Supreme Court today stating that no farmer had committed suicide in the state, and clarified that those who have, took the extreme step due to personal reasons.

This comes after the Supreme Court on April 13th ordered the Tamil Nadu Government to file a detailed reply in the farmers' suicide issue in two weeks.

Expressing displeasure on inaction on farmers' suicide issue, the apex court lashed out at the government for not taking enough measures to prevent the farmers' suicides in the state.

An apex court headed by Justice Dipak Misra said, "It is very painful to hear it that farmers are committing suicide and the state government is not taking enough steps."

An NGO had moved the apex court, pointing to the increasing cases of farmers' suicides.

Earlier, the Madras High Court had directed the Tamil Nadu Government to waive loans of all drought-hit farmers and restrained cooperative societies and banks from recovering their dues.

The High Court noted that the state's financial situation was grim and it was single-handedly shouldering the debt burden in a drought year in which farmers were committing suicide. The High Court also suggested that the Centre come forward to extend financial help to Tamil Nadu during this difficult situation.