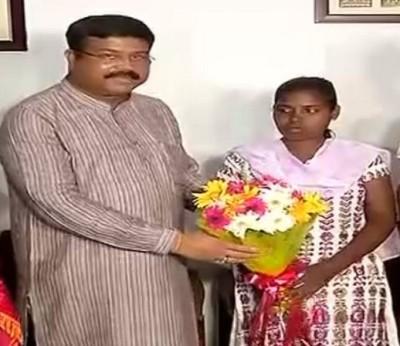 While terming her achievement as a matter of pride for Odisha, Union Minister Dharmendra Pradhan felicitated Monika Mankdia and wished her success.

" Mankdia community lives in Sukinda block of Jajhpur district in Odisha. As per primary information, for the first time a girl from that community has passed matriculation. Girl's father Ramdas Mankdia is a daily wage labourer. First time from such background, a girl has passed matriculation. We felicitated her and honoured her. We want Monika to pursue higher education. It is a matter of pride for Odisha. Everybody wishes her for a successful life," Pradhan told the media here.

Social activist Geetanjali Mahant said that others will derive inspiration from Monika and would exercise their rights, thereby marking their foot in the main society.

"In Jajhpur, Monika is the first girl from the primitive adivasi community to become matriculate. The people, who have been alien to their education rights, will be inspired by this girl and will be able to become a part of the main society. The government's health, education facilities have not reached them," Mahant told ANI.

There are only 3,000 Makdia Adivasis spread in nine districts of Odisha.

Let's hope Monika sets an example for others to follow and inspires more children from her community to mark their names in the field of education. (ANI)