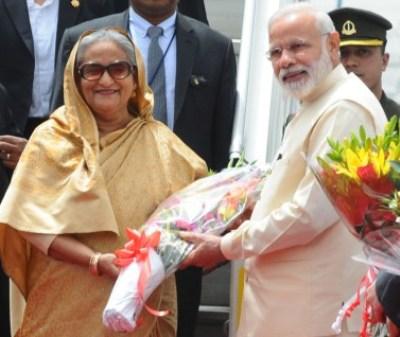 The two leaders will discuss the entire gamut of bilateral relations.

More than 20 pacts are set to be inked after the delegation-level talks.

Two agreements are expected to be signed in the area of defence. India will also extend Line of Credit of 500 million dollars to Bangladesh for defence purchases.

Besides, India will enter into an inter-governmental agreement with the neighbouring country on civil nuclear energy.

Train services, involving West Bengal and Bangladesh and bus service connecting Kolkata and Dhaka will also be launched during the visit.

The Bangladesh Prime Minster will be accorded ceremonial reception at the forecourts of Rashtrapati Bhawan in the morning.

She will visit Rajghat, the Samadhi of Mahatma Gandhi, to lay wreath.

Bangladesh Prime Minister Hasina along with her Indian counterpart will also attend 'Sommanona Ceremony' in the evening to honour the Indian martyrs who sacrificed their lives in the liberation of Bangladesh.

The Bangladesh Prime Minister arrived in the national capital yesterday on a four-day visit to India.

In a special gesture, Prime Minister Modi drove to the Delhi airport to receive her.

Later, in a tweet, Prime Minister Modi said he and his Bangladeshi counterpart are determined to take the relationship between the two nations to a new level. (ANI)