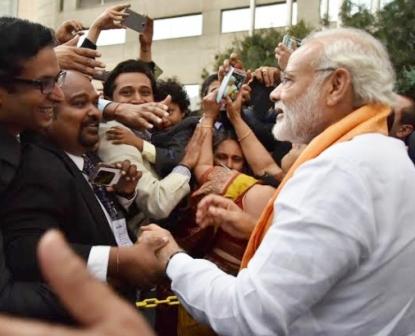 "It's an honor to welcome you to our country, PM Narendra Modi. I trust that your stay in Mexico will be both productive and pleasant," tweeted Mexican President Enrique PeAÂ±a Nieto.

Interacting with a boisterous crowd waiting outside the hotel, the Prime Minister also clicked photographs with them.

As he landed at the Mexico City International Airport, Prime Minister's office tweeted, "Reached Mexico City. The visit is brief but substantial ground will be covered in my talks with @PresidenciaMX."

Prime Minister Modi, who will hold bilateral talks with President PeAÂ±a Nieto, will be first Indian prime minister after Rajiv Gandhi who paid a bilateral visit in 1986. Former prime minister Dr. Manmohan Singh had visited Mexico in
2012 for a G20 Summit.

President PeAÂ±a Nieto will host a dinner in honour of Prime Minister Modi, following which he would take off for India en route Frankfurt.

Briefing the media before the Prime Minister's five-nation tour in New Delhi, Foreign Secretary S Jaishankar said, "This visit's origins lie in a meeting which Prime Minister had with the President of Mexico at the UNGA last September. The President was very keen that he (Prime Minister) should visit Mexico early. This March, the Foreign Minister of Mexico was here and we discussed taking this further."

"We have a growing trade with Mexico. Today, the two-way trade is about USD 6 billion approximately, and there are a lot of possibilities. Our pharmaceutical and automotive exports to Mexico are particularly strong, and we do import crude oil from Mexico. We are actually the largest importer of crude oil from Mexico in Asia and the third largest globally. So, you will see in Mexico a fair amount of discussion on scaling up economic cooperation," he said.

"We expect to have at the President-Prime Ministerial level exchange of views on the world situation. But we do expect that the focus of discussions would be on bilateral cooperation, especially bilateral economic cooperation. We look Latin American countries, in terms of economic cooperation Mexico kind of ranks right up there. But there is still a feeling that there are opportunities which we should be exploiting better. There are already Indian companies in Mexico and Mexican companies here (in India), but the expectation is that particularly on the investment side, there would be a greater push," added the Foreign Secretary. (ANI)