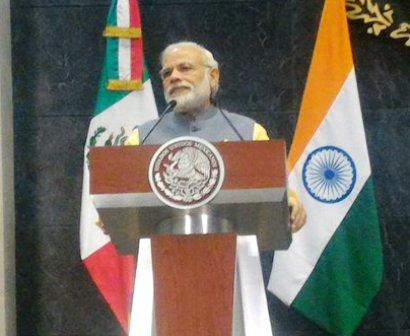 "Mexico was the first Latin American country to recognise India. I and President Enrique PeA¬±a Nieto are meeting for the third time in last two years. Since then the trajectory of our bilateral ties have shown growing intensity," Prime Minister Modi said while issuing a joint statement along with the Mexican President.

While asserting that India and Mexico are now looking to move beyond their buyer-seller relationship, Prime Minister Modi said both the nations have agreed to find ways to deepen cooperation in space, and science and technology.

"We will also prioritize concrete projects in areas of agricultural research; bio-technology; waste management; disaster warning and management, and solar energy. Mexico is an important partner for India's energy security," he added.

The Prime Minister also thanked the Mexican President for his support to the International Solar Alliance.

"I thank President Enrique PeA¬±a Nieto for his positive and constructive support for India's membership in the NSG," he said.

Earlier, US President Barack Obama had also said that his country is backing India's bid to join the club.

The NSG is a 48-nation club dedicated to curbing nuclear arms proliferation by controlling the export and re-transfer of materials that could foster nuclear weapons development. (ANI)