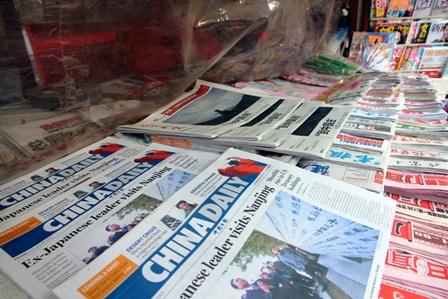 Beijing: Amid reports that India is mulling tightening of security checks on Chinese firms, China's official media on Wednesday said such move will hurt India more.

"India stands to lose more than gain if it tightens its security checks on Chinese firms if it scrapped security clearance to Chinese companies," an article in the state-run Global Times said.

The article came days after official sources in India said the view in the security establishment is that security clearances given to Chinese companies should be reviewed after China's action in the UN on India's bid in the wake of terror strike at the Pathankot airbase.

"Chinese companies may think twice about their expansion plans in India over the possible security clearance review. Thus, India's development, which relies on China to improve its poor infrastructure, will be hindered," Hu Zhiyong, a research fellow with the Institute of International Relations at the Shanghai Academy of Social Sciences told the daily.

Though Chinese President Xi Jinping during his visit to India in 2014 announced USD 20 billion Chinese investments in India in the next five years, Indian officials and business organisations say the flow of investments remained low despite India liberalising visa regime and removing security clearances for Chinese firms.

A Chinese embassy official in India familiar with China's overseas investments acknowledged to the Global Times that India's security clearance of Chinese firms has been showing signs of relaxing in recent years, especially after Narendra Modi became the Prime Minister in 2014 and Minister of Home Affairs Rajnath Singh's visit to China November last year.

"Although India conducted a security review of Chinese firms, Chinese companies in India say the general business environment is improving, and the Chinese companies' feedback is positive," the official said.

Media reports say that the Indian government has given around 25 Chinese companies security clearance in the past two years for projects mostly in power, telecoms, railways and infrastructure. But at the same time there seems to be a rethink in India over granting liberalised regime, specially after Beijing blocking its moves to get Pakistan militant groups carrying out terrorist attacks on its soil to be banned by UN.

China which is permanent member of the UN Security Council has putting technical hold on India's move in the sanction committee formed under resolution 1267 to clamp down on global terrorist networks.

Indian officials say the technical holds are put at the behest of Pakistan to ban Azhar after the Pathankot terrorist attack despite furnishing required evidence.

Defending China's action, Chinese Foreign Ministry spokesman Hong Lei said, "On April 1 that China always dealt with the listing issue under the UN Security Council committee "based on facts and relevant rules of procedures in objective and just manner".

Sun Shihai, vice director of the Institute of Asia-Pacific Studies at the Chinese Academy of Social Sciences, said that the Indian government is unlikely to tighten its policies toward all Chinese investments, but it may pick on some Chinese companies.

Differences between China and India in other fields should not threaten the bilateral trade and commerce relation, Lan Jianxue, an associate research fellow at the China Institute of International Studies said. (PTI)