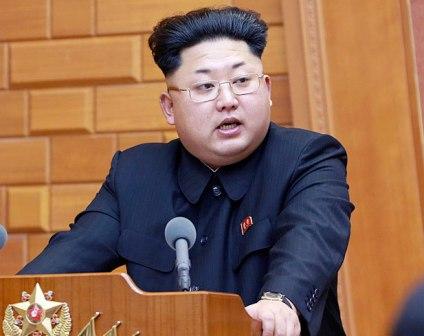 Xi also the General Secretary of the ruling Communist Party of China (CPC) congratulated Kim on behalf of the CPC in his own behalf and hoped that the North Korean people will achieve new accomplishments in the cause of building socialism under the leadership of the WPK headed by Kim.

The China-Democratic People's Republic of Korea, (DPRK) friendship was personally forged and carefully fostered by the two countries' leaderships of the older generation, Xi said.

"The traditional friendship is a treasure of both sides," he said, highlighting the close links between the two countries notwithstanding Pyongyang's isolation resulting in US sanctions clamped over its aggressive policy to acquire nuclear weapons.

Xi also noted that the CPC and the Chinese government attach great importance to the ties between the DPRK and China, state-run Xinhua news agency reported.

China stands ready to work with the DPRK to promote constant development of bilateral relations for the benefit of the two countries and to make positive contributions to safeguarding peace, stability and development in the region, Xi said.

While China implemented the UN sanctions against North Korea, Beijing regards Pyongyang as a close ally along with Pakistan.

"We also believe that all the resolutions related to the Korean nuclear issue passed by the UN Security Council shall be observed and executed by all relevant parties without reservations," Lu said. (PTI)