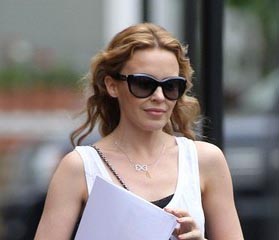 Los Angeles, Jan 17 - Singer Kylie Minogue, who has completed working on her new album, says it is about "taking the plunge" and "embracing the future".

The 45-year-old, who is working with rapper Jay Z's Roc Nation label since a year, said that making her new album was challenging, reports contactmusic. com.

"I actually didn't know where I was going or what the future held at the end of 2012. There's been a lot of change, this album is about taking the plunge and embracing the future and not holding on to things from the past," The Sun Newspaper quoted Minogue as saying.

"Into the blue" will be the first track from Minogue's upcoming album, which is scheduled to hit the stores later this year.