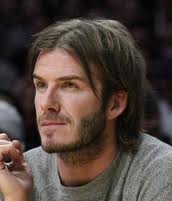 "David is 36 and knows he won't be playing soccer forever. But he's an icon for men all over the world and he wears pants like no one can - so it makes sense for him to launch his own," contactmusic. com quoted a source as saying.

The 36-year-old, who signed a deal to create his own collection of underwear earlier this year after starring in an advertising campaign for Emporio Armani men's briefs, will launch the range in February next year.(IANS)