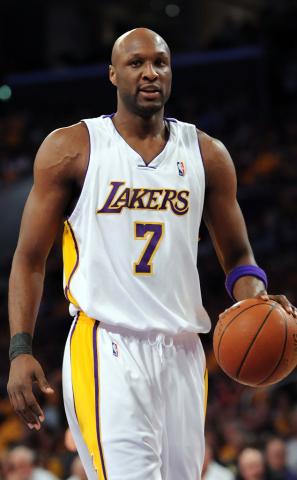 Melbourne, Oct 17 - Though Lamar Odom, who is presently fighting for his life in a hospital after being found unconscious in a Nevada brothel, is a former professional basketball player, but one need not denote him as a 'reality star' or 'Kardashian ex' on the first place as per ESPN anchor Scott Van Pelt, who is fighting for the player's right.

The American news anchor requested every media outlet to stop labeling the 35-year-old American basketball player as a reality star or his estranged wife Khloe Kardashian's ex as above all this, he is an NBA champion and has played a significant role in the Los Angeles Lakers teams, News. com. au reported.

The 49-year-old sportscaster asked the media groups not to group Odom along with those whose fame comes in the absence of accomplishment as the player earned his respect and has been the Sixth Man of the Year.

Van Pelt also said he understands that not everyone watches sports, but id someone has to denote him it's better to call him an NBA star or least 'Odom' as he just got married on a TV show years back, but a "show that no one watches."

The Olympic bronze medalist was an active NBA player and won back-to-back NBA championships with the Los Angeles Lakers until he was waived by the New York Knicks in July 2014. (ANI)