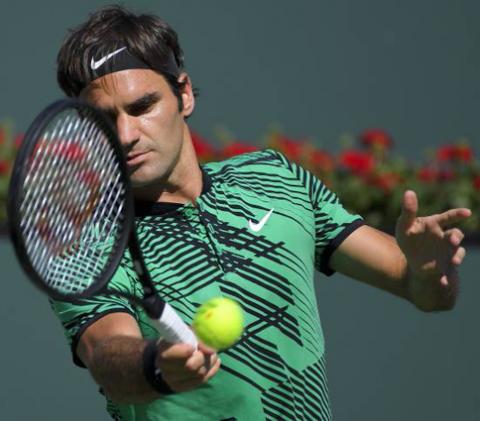 California [USA], Mar. 20 : Swiss maestro Roger Federer once again displayed why he is called a legend as he defeated Stan Wawrinka in straight sets to earn a record-tying fifth Indian Wells title on Sunday.

Federer defeated Wawrinka 6-4, 7-5 in an all-Swiss final that lasted for one hour and 20 minutes.

The 35-year-old, who was out of the game for at least six months due to an injury in 2016, returned to the Tour at the start of the season in spectacular fashion, capturing his 18th Grand Slam championship at the Australian Open with a five-set victory over fourteen-time grand slam champion Rafael Nadal.

"For me, the dream run continues," Federer said after the victory.

"The fairytale of the comeback that I have already shown in Australia. I'm not as surprised as I was in Australia, but still this comes as a big, big surprise to me, nevertheless, to win here again and beating the players that I did and the way I did. I mean, couldn't be more happy."

"It's an absolutely huge start to the year for me. Last year didn't win any titles. The change is dramatic, and it feels great," he added.

At 35 years, 7 months, Federer became the oldest champion in the tournament's history, surpassing Connors, who was 31 years, 5 months when he won in 1981.

In the women's category, Elena Vesnina defeated fellow Russian Svetlana Kuznetsova 6-7(6), 7-5, 6-4 to lift the biggest singles title of her career so far.

Vesnina stormed back from a set and 1-4 down to claim the title. She will rise to No. 13 in the world -- a career best -- when the latest WTA rankings are released on Monday.

"I cannot believe it to be honest, to win such a big title against Svetlana, a Top 10 player," said an elated Vesnina.

"When I was down 4-1 in the second set, it seemed like so far away this title. Now I won it and I'm so, so happy. I was playing a bit more free when I was down in the score. I took my chances," she added. (ANI)