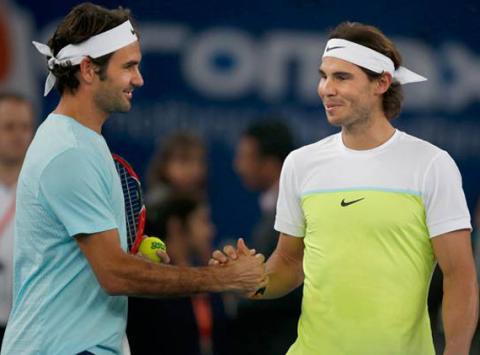 Johannesburg [South Africa], Mar. 15 : Fourteen-time grand slam champion Rafael Nadal and Swiss maestro Roger Federer will once again grab people's attention when they meet each other in the fourth round of the ATP Tour's Indian Wells Masters on Wednesday.

Despite defeating the Spaniard in Melbourne to claim his 18th Grand Slam title, Federer has admitted that their quarter-final clash will have something of a different flavour.

The Swiss maestro had defeated Nadal 6-4, 3-6, 6-1, 3-6, 6-3 at Rod Laver Arena in the final match that lasted for more than two-and-a-half hours to win his fifth Australian Open crown.

"It will feel different," Sport24 quoted Federer as saying after he defeated American Steve Johnson 7-6 (7/3), 7-6 (7/4) to book the epic clash, which will be the 36th career meeting between the two.

"It's going to be more difficult for both of us just to rip winners into the corner.

"If you play at the early matches, you see usually the top guys not chase the lines so much. You give yourself some margins for error. So I think the match will be played a bit different," he added.

The last time the duo met this early in a draw was their very first encounter back in 2004, in the third round of the Miami Masters, when Nadal, who was 17-year-old then introduced his matador's mentality to top-ranked Federer in the form of a 6-3, 6-3 upset.

"It was a long time ago," said Nadal, who progressed through to the last eight with a 6-3, 7-5 victory over Fernando Verdasco.

"I went on court, nothing to lose. A lot of motivation to play against, I think, number one already."

"For me to play with Roger, doesn't matter if it was in that early round, I didn't feel it was unlucky for me. It was a beautiful match, and I tried to go out on court and enjoy it and fight for it," he added.

Djokovic will next face Australian Nick Kyrgios, a 6-3, 6-4 winner over Russian Alexander Zverev.

In other contest, righth-seeded Svetlana Kuznetsova of Russia sped past Caroline Garcia 6-1, 6-4 to lead the way into the quarters.

She was leading Timea Bacsinszky 5-1 when the Swiss player retired with a left wrist injury.