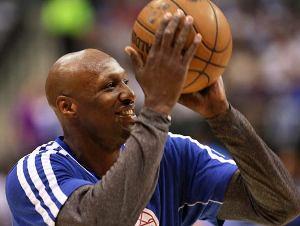 Washington D.C., Oct 18 - American basketball player Lamar Odom, who was hospitalised on October 13 and went into a coma after being found unconscious at a brothel in Nevada, has now been transported from the Las Vegas hospital to Los Angeles, California for further medical care.

The sources informed that doctors of Sunrise Hospital in Las Vegas were already planning the former NBA star's transfer to L.A., but were waiting for the player to respond and get in a stable condition because his stature previously prohibited him from being airlifted in a helicopter, E! Online reported.

The source added that the 35-year-old player's estranged wife Khloe Kardashian has accompanied him in the helicopter ride to Los Angeles.

Though the former Laker player's health is improving day by day, he still would require a lot of rehab in the coming months.

Odom is still on dialysis due to kidney failure, he is showing signs of improvement. He passed a swallowing test, a promising sign of neurological function, and has communicated using hand signals. Additionally, he is no longer wearing an oxygen mask. (ANI)