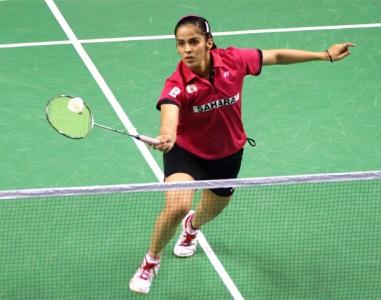 The Olympic bronze medallist outplayed her Japanese opponent 21-15, 21-14 in a contest that lasted for 52 minutes last night.

Nehwal, who had bagged the Swiss Open title in 2011 and 2012, will next face third-seed and her fierce rival Wang Yihan for the final- berth.

Earlier on Thursday, Saina dropped three places to sixth in the latest BWF world rankings following a quarter-final loss at the All England Championship.

She battled through injuries last year and had to miss out on a few tournaments this season, including the Syed Modi Grand Prix Gold and South Asian Games.

Meanwhile, compatriot P. V Sindhu knocked out of the tournament after going down 13-21, 15-21 at the hands of HE Bingjiao of China in their quarter-final clash.

In the men's singles event, 13th seed H. S Prannoy also produced an imperious form to advance to the next round of the tournament after trouncing Thailand's Tanongsak Saensomboonsuk 21-18, 22-24, 21-9 in a one-hour contest. (ANI)