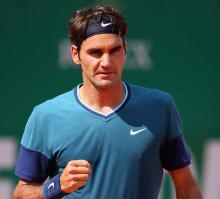 Melbourne, Jan. 02 - World number three Roger Federer has expressed that he would be 'OK' even if he is not able to add to his record 17 Grand Slam titles in the upcoming season.

The Swiss maestro, who reached the finals of two Grand Slams last year, revealed that it would be amazing to win another Grand Slam title but admitted that he wouldn't be frustrated if he fails to win any more major championship, News. com. au reported. 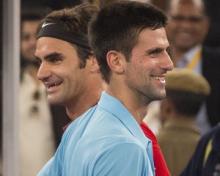 Melbourne, Dec. 26 - Novak Djokovic and Roger Federer are set to take their on-court rivalry to newer heights, with the tennis stalwarts gearing up to become the first man in the history of sport to break through the 100 million dollars on-court earnings barrier in 2016.

Federer not ready to relinquish `SABR` tactic in 2016 season 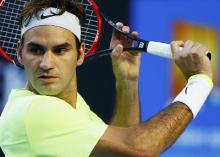 Johannesburg, Dec.19 - World number three Roger Federer has said that he will continue to polish his sneak-attack tactic ' SABR' as he aims to add more to his record haul of 17 Grand Slams in the 2016 season.

The Swiss maestro attracted headlines across the world for using the strategy, which involves advancing right up to the service line on an opponent's serve. He employed it to a great effect at the US Open and the preceding Cincinnati final. 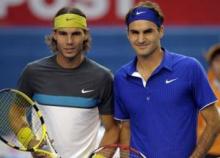 New Delhi : They are known to bring the house down in their on-court face-offs, but tennis icons Roger Federer and Rafael Nadal showed that they could do exactly the same with just a mike in front of them.

Addressing a joint press conference at the end of the International Premier Tennis League's India leg, the two contemporary legends of the game were jovial and sharp-witted, sending down some verbal aces while engaging in light-hearted banter.

Sitting between the two during the interaction was IPTL founder Mahesh Bhupathi, who had a good time laughing along with the media.

Federer to join forces with Hingis at Rio Olympics 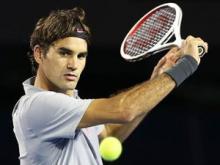 Johannesburg, Dec.12 - Swiss maestro Roger Federer has confirmed that he will team up with compatriot Grand Slam winning star Martina Hingis in the mixed doubles event of next year's Rio Olympics.

The 17-time Grand Slam champion said that he would play with Martina in the mixed, adding that he was very excited about the pairing as he hadn't played with the latter in 15 years, Sport24 reported.

Federer joined forces with Hingis last in their victorious campaign at the Hopman Cup in Australia in 2001.