London, July 5 : Incumbent Wimbledon Champion Roger Federer believes that he is enjoying an incredible winning streak on grass, and insists that he will be the favourite against Spaniard Rafael Nadal, as he looks to land his sixth successive men‚Äôs singles title at the event.¬†

The world No 1 has lost 11 of his 17 clashes with the Spaniard, but has beaten him in the last two finals at the All England Club.¬†

London - Regal Roger Federer destroyed the upset dream of fellow Grand Slam champion Marat Safin with an imperious 6-3, 7-6 (7-3), 6-4 display on Friday to reach a sixth consecutive final at the Wi

London, July 3 : He may have reached his first Wimbledon semi-final but Marat Safin insists that he stands no chance against five-time champion Roger Federer.

London, July 3 : Roger Federer may be some steps away from winning the sixth Wimbledon title, but the five-time champion has already set his sights on the seventh and hopes to win the tournament for the next five or ten years.¬†

The 26-year-old outclassed Mario Ancic to reach the semifinals and extend his grass-court winning streak to 64 matches on the first day of significant rain delays at the All England Club.

No panic for Federer in dominating win over Ancic 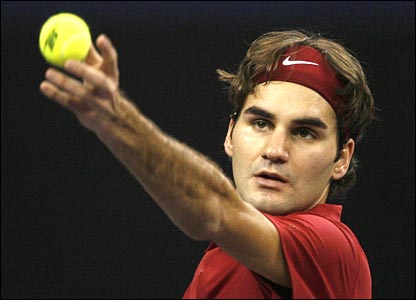