Washington D. C., Feb. 21 - Seems like Lamar Odom is back on his feet as he was recently spotted going grocery shopping in Calabasas, California, just one week after his first public appearance at Kanye West's Yeezy Season 3 fashion show in New York City.

It is being said that the 36-year-old former NBA player, who sported a black hooded sweatshirt, black T-shirt and black sweatpants for the outing, looked healthy and in good spirits while shopping, E! Online reports. 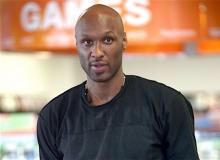 Washington D. C., Feb. 12 : Lamar Odom recently made his first public appearance, ever since he was hospitalized in October
2015, at Kanye West's Yeezy Season 3 show at Madison Square Garden.

Notably, the 36-year-old former NBA player's estranged wife Khloe Kardashian sat next to him throughout the entire show and both were all smiles on their joint public appearance, E! Online reports.

A source close to the former NBA player revealed that the 38-year-old rapper visited him in Cedars-Sinai hospital and enthralled him with rough cuts from his new music.

Washington D. C, Jan. 27 : Khloe Kardashian is continuing to be a pillar of strength for her estranged husband Lamar Odom, whose speech has improved drastically.

An insider revealed that the 36-year-old NBA player is doing much better, adding that his progress over the past month has been great, E! Online reports.

The source continued that Kardashian and Odom are so close right now that if the latter is not in therapy, he is often with her.

Khloe K wished to have kids with Lamar Odom 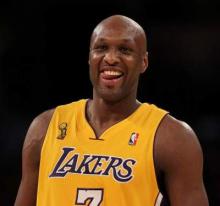 Washington D. C., Jan. 24 : Khloe Kardashian and Lamar Odom wanted to be parents to both biological and foster-kids, it has been revealed.

The 31-year-old reality star, who called off her divorce from the basketball player when he was hospitalised in Las Vegas last year, revealed that they were keen on having children during "happy-days" in their marriage and also considered adopting a kid, reports Channel 24.

Speaking on her talk show, the ' Keeping Up with the Kardashians' star said: "Lamar and I, we wanted to ... conceive, but we also wanted to adopt but also foster kids." 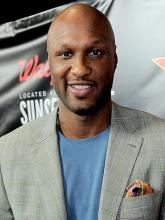 Washington D. C., Jan. 9 : Lamar Odom has come far in his recovery journey as he has been released from a Los Angeles hospital.

According to sources, the 36-year-old former NBA player was moved into a private rehabilitation facility on January 7, where he will continue his treatment, reports E! Online.

Khloe Kardashian's former husband had remained in a hospital since October 13, when he was found unconscious in a Las Vegas brothel due to drug overdose.