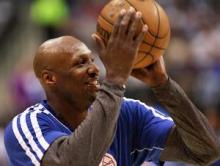 Washington D.C., Oct 18 - American basketball player Lamar Odom, who was hospitalised on October 13 and went into a coma after being found unconscious at a brothel in Nevada, has now been transported from the Las Vegas hospital to Los Angeles, California for further medical care.

The sources informed that doctors of Sunrise Hospital in Las Vegas were already planning the former NBA star's transfer to L.A., but were waiting for the player to respond and get in a stable condition because his stature previously prohibited him from being airlifted in a helicopter, E! Online reported.

Washington D.C., Oct 18 - Lamar Odom, who has been struggling for his life since he was found unconscious at a brothel in Nevada, is now doing pretty fine and reportedly has been giving the thumbs up and thumbs down signs while responding.

The sources close to the doctors revealed that though the former NBA player wasn't out of the woods right now, his recovery was significant and had begun breathing on his own after coming out of sedation, E! Online reported.

Melbourne, Oct 17 - Though Lamar Odom, who is presently fighting for his life in a hospital after being found unconscious in a Nevada brothel, is a former professional basketball player, but one need not denote him as a 'reality star' or 'Kardashian ex' on the first place as per ESPN anchor Scott Van Pelt, who is fighting for the player's right.

Washington D. C., Oct 16 - Every single person attached to Lamar Odom, who was hospitalised on Tuesday and is in coma, is presently wishing for his life and recovery, including his co-players Nick Young and Metta World Peace.

World Peace said that he's hoping that his former Los Angeles Lakers star, who suffered a drug overdose at a Nevada brothel on Tuesday and from then is fighting for his life, gets well and gets the support he really deserves, E! Online reported.

Washington D. C., Oct 16 - Lamar Odom, who has been hospitalised and since then is in coma, reportedly had bad mental health and went through a tough time before indulging in drug overdose.

A source informed that the few past years have been very tough for the American professional basketball player, who's presently battling for his life in the hospital, and was also previously arrested for DUI in August 2013, E! Online reported.