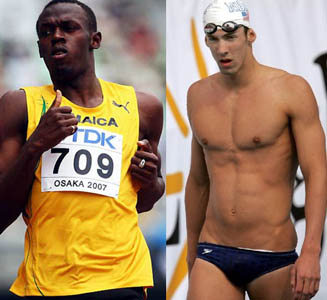 Hamburg - Jamaican sprinter Usain Bolt and American swimmer Michael Phelps aim to confirm their greatness with world championship titles in 2009 against the backdrop of the global economic crisis.

Fans will also follow football's Confederations Cup in South Africa which serves as a test for the World Cup there in 2010.

The 2016 Olympic host city is elected while Formula One gears up for another dramatic world championship in which Briton Lewis Hamilton has his title to defend.

But F1 will be without Honda and the rally world championship lost Suzuki and Subaru as the grim economic realities are starting to affect world sports in this non-Olympic year.

Tiger Woods for instance returns to golf from a severe knee injury without the endorsement of US carmaker General Motors.

But it remains open how hard sports clubs and athletes will feel the economic slide as sports federations can also be crisis-resistant due to long-term sponsorship deals.

The International Olympic Committee and the football body FIFA have expressed their belief to get through the glum period unharmed.

But the IOC has already seen four of its top level sponsors decline to renew their Olympic deals. Its has also postponed the sale of American TV rights for the 2014 and 2016 Games.

Chicago, Tokyo, Madrid and Rio de Janeiro are the finalists for the 2016 Games with the host city elected by the IOC on October 2,
2009, in Copenhagen.

US president-elect Barak Obama has thrown his weight behind his home town Chicago which could bring the Games back to the US
20 years after Atlanta 1996.

The big championships next year should be safe from financial problems as they have long planned their budget and lined up sponsors.

Bolt hopes for more sprint glory at the August 15-23 world athletics championships in Berlin after getting three golds in world record times at the Beijing Olympics.

It won't be any problem. Everybody's going to be gunning for me. I'm definitely motivated for next season. Last year I was in the best shape of my life. I better be able to reproduce it again," he said.

Just ahead of Berlin, the world's leading swimmers gather in Rome July 19-August 2 for their world championship.

Phelps will be measured by his historic eight golds from Beijing and has seven world titles from 2007 to defend. But his coach Bob Bowman has already warned to "keep expectations fairly low" as Phelps may only compete over short distances.

A flood of world records like the 108 from 2008 could also be a one-time affair as the ruling body FINA may take action against new race suits.

Alpine and Nordic skiers have their world championships in February in Val d'Isere, France, and Liberec, Czech Republic, respectively. The biathletes have their worlds in Asia for the first time, in the South Korean resort of Pyeong Chang.

Brazil are the defending champions while for the host nation a smooth running of the event without hitches in security and other areas could be more important than success on the pitch.

Formula One will have a hard time to match the 2008 drama as Hamilton ensured himself of the title in the last lap of the last race. A new battle of his McLaren team with Ferrari is expected, with BMW and others the regular dark horses.

"I am certain that it will be as difficult next year," said Hamilton, who like all others will have to cope with the new cost- cutting measures. (dpa)